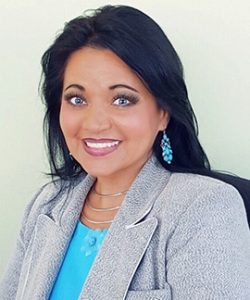 1st Term: 2014-2015 2nd Term 2016-2018 3rd Term 2019-2021
Hernandez is an adjunct professor at Grand Rapids Community College and serves as the Director of the Y Achievers program at the YMCA of Greater Grand Rapids. She previously served as dean of students at Central High School in Grand Rapids Public Schools and as principal in Muskegon Heights. Hernandez holds a bachelor’s degree in Spanish and Sociology, a master’s degree in Educational Leadership, and an Educational Specialist Degree, all from Grand Valley State University. She completed her coursework toward her Doctorate degree in Educational Leadership from Eastern Michigan University. 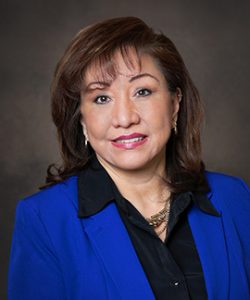 1st Term: 2015-2016 2nd Term: 2017-2019
Reyes is the director of the disability services at Saginaw Valley State University and the director of the Great Lakes Bay Hispanic Leadership Institute. She also serves on several boards and committees in her community. Reyes is a member of the Society for Human Resources, the GLC Hispanic Business Association, and of Women in Leadership. Reyes obtained both her bachelors and masters from Saginaw Valley State University. She is also certified as a Business Professional, a Professional in Human Resources, a Public Manager, and as a Trainer. 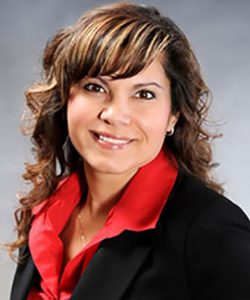 1st Term: 2016-2018 2nd Term 2019-2021
With almost 20 years of combined experience in the legal field, Juanita F. Bocanegra currently serves as an assistant prosecuting attorney with the Ottawa County Prosecutor’s Office. Before joining the Prosecutor’s Office, she was engaged in private practice with the law firm of Rhoades McKee, PC in Grand Rapids, where she practiced in the areas of business and corporate law, probate and estate planning, commercial and civil litigation and family law. Juanita also worked as a legal assistant for Hann Persinger, PC, in Holland, prior to attending law school.
Juanita received her Juris Doctor from Thomas M. Cooley Law School and graduated from the Honors Program at Grand Valley State University with a Bachelor of Arts in International Relations and Spanish and Legal Studies minors. While in law school, Juanita won the Thomas M. Cooley Law School 2007 Mock Trial Competition and also received the Top Litigator Award. She is a member of the State Bar of Michigan and the Ottawa County Bar Association.
Juanita has been a trustee with the Community Foundation of the Holland Zeeland Area since May 2009. She currently serves as Chair of the Distribution Committee and is part of the Executive Committee as Board Secretary. Juanita also serves on the Holland Hospital Board of Directors and serves as Chair of the Community Outreach Committee. For over six years, she also served with the Lakeshore Alliance Against Domestic and Sexual Violence and was a member of the Executive Committee. She is a member of the Greater Holland Area Women Who Care. 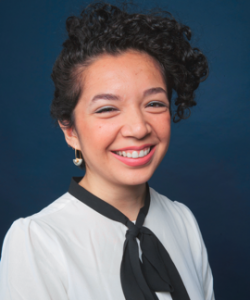 1st Term: 2017-2019
Originally from Monte Alto, Texas, Esperanza Felicidad Cantu moved to Michigan after receiving her Bachelor of Arts degree from Kalamazoo College. During college, Esperanza held leadership positions and participated in the student groups Latino Student Organization and el Movimento Estudiantil Chicano y Chicana de Aztlan (M.E.Ch.A.) de Kalamazoo. She continued her work in the community sector at Detroit Hispanic Development Corporation, where she worked in administration, program management, marketing, and fundraising. In 2013, she enrolled in the Executive Master’s Program in Health Management and Policy at the University of Michigan’s School of Public Health, and she continued to work full-time and study to obtain her Master of Public Health degree in 2015. She transitioned to a full-time fellowship in Population Health at the Detroit Wayne County Health Authority, made available through the W.K. Kellogg Foundation. It was at this public body corporate that Esperanza learned about the importance of authentic relationships in building cross-sector collaboratives, improving population health, and supporting health equity. In 2016, Esperanza transitioned to the City of Detroit’s Health Department, where she currently serves as a Project Leader in the Special Projects division, which focuses on building capacity and supporting new initiatives that affect childhood health.

For the first time in the 43 year history of the Hispanic Latino Commission, the members elected an all women Executive Committee to lead the way into 2019. Sonya Hernandez of Muskegon County was elected Chair with Monica Reyes of Saginaw County chosen as Vice-Chair. Juanita Bocanegra of Ottawa County was elected by her peers as Secretary and Esperanza Cantu elected as Trustee to fill out the Executive Committee.

The Hispanic/Latino Commission is a 15-member Commission under the Michigan Department of Licensing and Regulatory Affairs. Commissioners are appointed by the Governor of Michigan, for three-year terms, subject to the advice and consent of the State Senate. Commission Leadership is elected from within the Commission.
The Commission meets monthly around the State to gain insight into each communities viewpoints and issues. Meetings are open to anyone as feedback and any engagement is used to understand what the Hispanic Latino communities face in their day to day interactions.

Purpose of the Commission:
The Commission exists to advocate for the well-being of the Hispanic/Latino population with the vision of achieving an environment of social justice and economic parity for the Hispanic/Latino population. The Hispanic/Latino Commission is composed by a 15-member Commission under the Michigan Department of Licensing and Regulatory Affairs. The commissioners are appointed by the Governor of Michigan, for three-year terms, subject to the advice and consent of the State Senate. For the commission to communicate with Hispanic-led organizations, community leaders, and the general public, it is required to have no fewer than six meetings a year that may be scheduled in various parts of the state.

The law directs the Commission to:
Advise the governor, the Legislature, and the office regarding the coordination and administration of state programs serving Hispanic/Latino communities.
Make recommendations to the governor and the Legislature regarding changes in state programs, statutes, and policies.
Advise the governor and the Legislature of the nature, magnitude, and priorities of the problems of Hispanic/Latino populations.
Review and approve grants to be made from federal, state, or private funds and which are administered by the Office.
Secure appropriate recognition of Hispanic/Latino accomplishments and contributions to the state.
Review and approve the annual report prepared by the Hispanic/Latino Commission of Michigan.
Mission: To enhance the abilities of Michigan Hispanics by improving their quality of life and by:
Promoting the appointment of more Hispanics in positions of influence in the public and private sector.
Increasing the economic growth and stability of Hispanics.
Increasing awareness and support of Hispanic issues by local and state government officials.
Promoting better education and academic achievement of Hispanics.
Creating a participatory, empowered Hispanic/Latino Commission of Michigan

Hispanic Latino Commission of Michigan To Meet In...